Ghostly Stories Under the Berg

Usually, any mention of haunted homes or paranormal activity always grabs instant attention. We all know ghosts are a figment of the imagination as there is little scientific data to back up claims of misty, ghoulish figures hopping around on gravestones.

However, nestled deep within each of us is still a perverse fascination with all things that go bump in the night. Some of the more intriguing tales that local folk swear are ‘true’ with right hands pressed fervently to their chests, involve donkeys, coaches, and whimsical suicidal maidens.

Let me introduce you to Charlotte, Miranda, Mathilda, and Ruth to say nothing of Sergeant Bosch, the unknown traveler, or the grey donkey. All of these entities have one thing in common. They’re all ghosts, someone somewhere has once seen them and they can all be visited along the journey to Underberg and Lesotho.

The Ghost of Nottingham Hotel.

Charlotte is our leading lady in this macabre parade.

She’s the most sociable and chatty, which was expected of a person of her profession and she is without a doubt the most undisputed of the entire bunch and has had encounters with local residents, hotel guests, and numerous hotel groupies. She is the longest-standing resident of the ‘Notties” (Nottingham Road) hotel. Charlotte was evidently a lady of the night which included a full list of duties even after the bar closed. She made the fatal mistake of falling passionately in love with a customer, who also happened to be a British army officer. Officer Tom had no intention of taking her back to meet ‘our Mum and Dad’ for a Sunday roast, so she promptly hopped over or was pushed from the balcony of No. 10. She still wafts around waiting for him to return whilst she re-arranges flowers, folds clothes, and calls room service. She must be a relative of Casper as she’s a friendly ghost so if you snooze in number 10 expect your hair to be ruffled and your laundry to be in neat piles in the morning.

Greg, my husband, and I stayed in # 10 one night, only because the hotel was full due to the Notties to Underberg 100 km bike race. Sadly, Charlotte was obviously otherwise occupied that evening and most distressing of all was my pile of unfolded laundry in the morning

The Ghost of Natal Training College.

Miranda is a lot more retiring. She hails from Pietermaritzburg. Dad was a pompous pratt because he had an impressive pedigree and beautiful Miranda was expected to continue this blue bloodline. She was however smitten with a lowly servant who mucked out the stables.

As a victim of mink and manure, her only recourse was to trot off and elope with the stable hand. En route they were apprehended, the stable hand was sacked and naughty Miranda was locked in her room where died of a broken heart. She still moons around the building, which is the former Natal Training College.

So, if you’re in the vicinity and feel an overwhelming need to visit your depression practitioner, check the area for a vague misty figure as Miranda is probably close by.

The Ghost of the Polo Tavern

Whilst in the Pietermaritzburg area you may as well pop in to visit Sergeant Bosch. This Hell’s Angel was a devil on his Harley Davidson which he usually tethered outside the Polo Club’s tavern whilst wetting his whistle.

In 1912 somewhere between January and December he roared up to the entrance pillars and although still sober, misjudged his approach and collided with the pillar. He died with his arms clasped firmly around Harley. The creepy part is that a journalist suddenly arrived, whilst it’s always creepy that journalists suddenly arrive, this journalist in true fashion photographed the gruesome scene. When the photo was developed Sergeant Bosch can clearly be seen climbing the stairs to the tavern.

The Polo Club was built in 1895 and remains to this day with Bosch leaving beer bottles lying around and forcing patrons to question their alcohol levels when he stops by for a chat.

Coming back towards Underberg on the Howick Old Main Road you may pass Ketelfontein, an impressive old mansion that was a half-way point for horse travelers in the early 1900’s.

One evening an exhausted man arrived to take shelter as he was being chased down by the law. He allegedly had a bag of pure quality diamonds that he had obviously procured by ill means. When the clever police arrived a gun battle ensued and he died. The diamonds were never found.

If you are in the area at dusk and see a frantic man digging in the garden of Ketelfontein, you’ve either met the unknown traveler searching for his diamonds, or perhaps it’s just someone who has read this article.

As you take the Underberg turnoff from the N3 be prepared for some of the most unusual sightings.

In these areas, I am acquainted with some of those who have borne witness to our mysterious apparitions.

The previous ghosts of the Mountain Park Hotel in Bulwer.

Now, this is a really interesting story. Matilda was a little girl who had a wooden desk at the end of the corridor of the third story and who used to sit on the stairs with her head in her hands. Ruth was the child minder and Wisp was there ethereal dog. As this regal old hotel became more neglected Matilda and Ruth and Wisp appeared to be quite active. And then the Ghost Busters arrived in the form of stunning new management who renovated and cleaned out all the old cobwebs. As the hotel slowly regained some of her former glory so Matilda and Ruth took their leave never to be seen again.

It’s worth a stop though if only to see what happens when an old lady is given some attention!

As you approach Underberg on the tree-lined R617 the scenery becomes a picture postcard with iridescent colours of green in the farmlands, against a background of purple mountains.

However, I caution you, don’t spend too much time gazing fondly out of your window rather turn your attention back to the road. If the night is wet and windy the mist tends to creep over the road just before Farmer Frank’s Farm. Many folk have seen the misty shape of a bedraggled old grey donkey standing forlornly in the road.

A few admit to swerving sharply but nowadays the potholes are usually more dangerous than donkeys. Those with softer hearts also admit to reversing back to see if they can do anything to help, but in return, none of them have ever been able to find the donkey. Maybe this animal ghost has a sense of humour and gets a kick out of watching the dodgem cars swerve as they see him.

Greg, the long-suffering husband, who is not prone to believing in fairy tales is adamant he’s seen it twice. I’ve either got to check the stock of our red wine stash or watch out for watery donkey visions when next traveling on this road.

Even I have to admit that some of our local community are on the wrong side of biblical times but as these are tough folk having lived their lives in Frontier Land, we’re prone to indulging their faded memories of days of the early part of this century. I’m always sad when we lose one of these stalwarts as so many colourful stories are lost. One of these remarkable men, who had run a huge farming enterprise way on the other side of Bushman’s Nek used to spend hours entertaining us with stories of gunfights in the main road and soirees into Lesotho to chase down stolen stock.

He also told me of a very strange occurrence that happened regularly on his farm when the weather became cold and misty, which in that area is quite often. A coach bedecked with lanterns and gasping horses were seen in the distance for just a few seconds.

However, I was never able to get more details as he passed on last year leaving just his memories behind.

The Ghost Rider in the Sky (Sani Pass).

Over the years, The Sani Pass in all her magnificent glory has seen more men and beasts tipping over her treacherous cliffs than most other mountain passes. In fact, in the old days when the road was a vague bridle path, travelers determined to conquer her challenges used to follow the vultures in the sky to find their way. So many pack donkeys slipped that the valley was filled with the carcasses of her prey.

However, the ghost that has gained notoriety is the Ghost Rider in the Sky. If you peer down into the valley about 3 km’s from the South African border post on the right-hand side, you will see the ruins of the old police post. It’s alleged that just in the valley beyond the police post was a small village.

Legend says that in this village lived an imposing young man, who proudly raised a herd of angora goats. His other prize possession was a huge black stallion so vicious that he would allow no-one else to ride him. One night, after heavy rains, a torrent of gushing water flooded the valley taking all the residents of the village, the goats and the young man and his mount, to a watery grave. After the flood, the police officers were reticent to return to their posts saying that in the late afternoon, when the mist rolled over the mountain pass, they could still hear the hooves of the stallion as he was ridden with gusto searching for the goats. Even to this day, travelers that return down the mountain in the misty dusk, report hearing the sound of a horse racing and seeing the orange sparks as his hooves hit the rocks.

The police post has long since been abandoned but the Ghost rider continues to search the Sky. 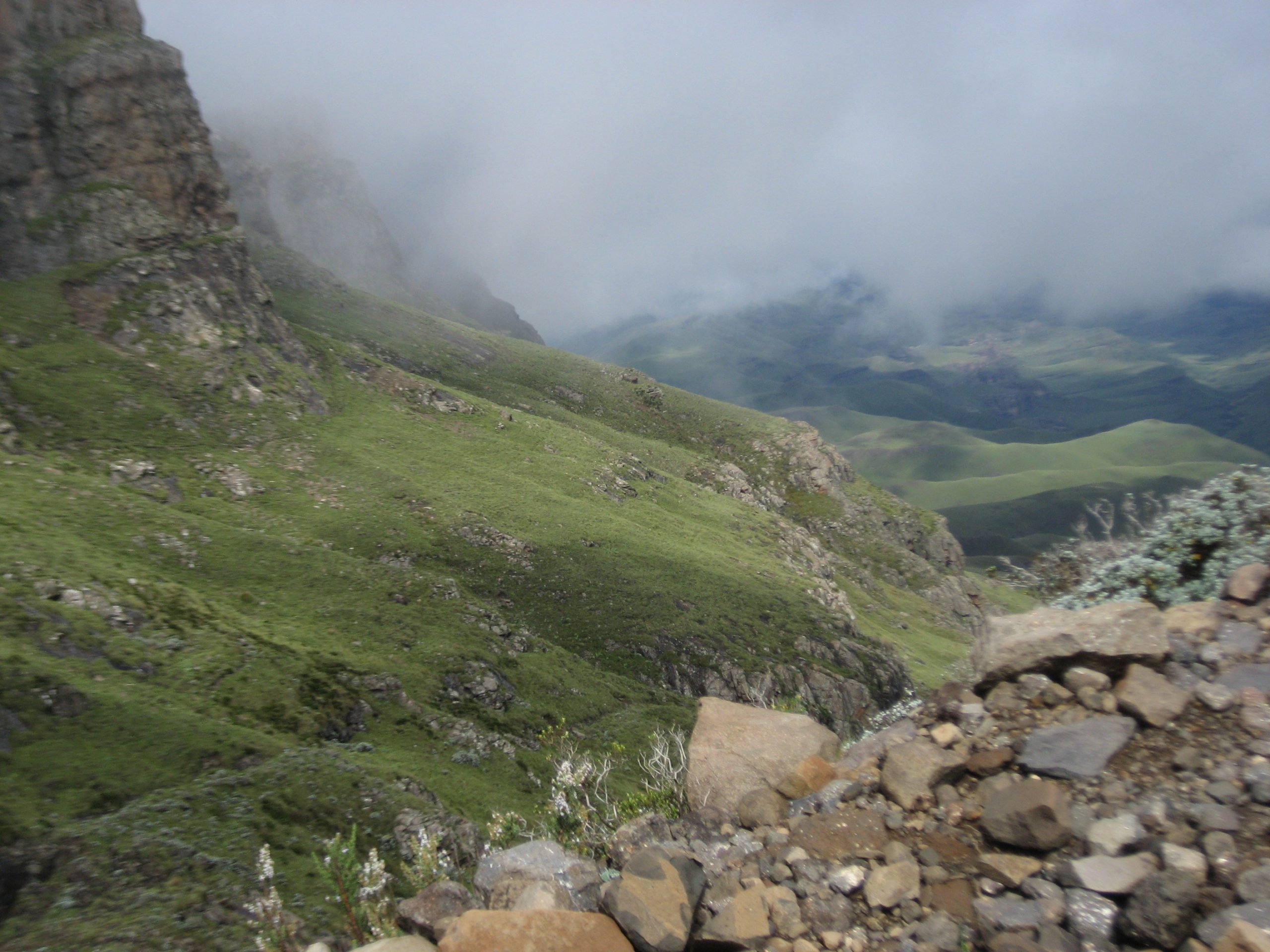 Mist rolling in over the Sani Pass

The many Ghosts of Lesotho.

Once in Lesotho, there are fascinating tales of ancestors warning of impending droughts and floods and family tragedies. I’m particularly partial to the fireside whisperings of the ghosts of those eaten by the cannibals. Whilst the actual number of those who landed up as lunch or dinner for these ferocious people is hotly debated, some missionaries believe it could be more than 30 000.

There is still a huge three-legged black pot that is reported to be the vessel where most landed up as stew or soup.

I wonder how many mystical figures dance shadowy circles around this vessel during the wee dark hours.

All in the imagination?

Fact, fiction, or pure trivia no-one will ever know for sure but even though I’m a full-blown cynic, when the mist rolls in on a dark and rainy night, I’m the first to batten down the hatches whilst listening intently for blood-curdling howls and woo-woo music.

After all, what’s the point in wasting an excuse to drink a good bottle of red wine.

3 thoughts on “Ghostly Stories Under the Berg”